Happy National Burger Month! To celebrate, Matt and I spent this weekend crushing excellent burgers as part of the YYC Burger Battle in support of Kids Up Front and Grow Calgary. There were over 50 burgers entered from different restaurants throughout the city, but we didn’t want to die, so we chose just 3 to share and got to work.

We started out the weekend at Naina’s Kitchen – they’re the defending champions from last year. Naina’s offered the “Canadian Sugar Rush” – a glazed donut bun encasing a half pound beef burger stuffed with Canadian bacon and cheese curds. The patty was topped with Canadian cheddar, bacon bourbon jam, pickled onions, lettuce and amber ale mayo. The patties here are more like gigantic, garlicky meatballs and this was true of their burger battle special as well. We asked for a knife to cut it in half and the waitress suggested we have the kitchen do it instead because the burger was just that tremendous.

Every bite of this thing was devastatingly good. The curds and bacon made a big, gooey mess, but that meant a huge mouthful of cheese in every bite. Naina herself came out and explained the bun to us – it was inspired by her grandmother’s old tray bun recipe, but with the dough fried, then glazed. 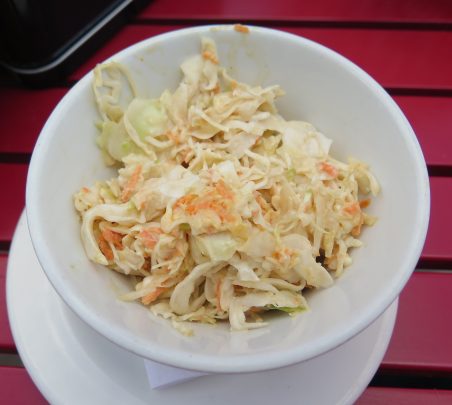 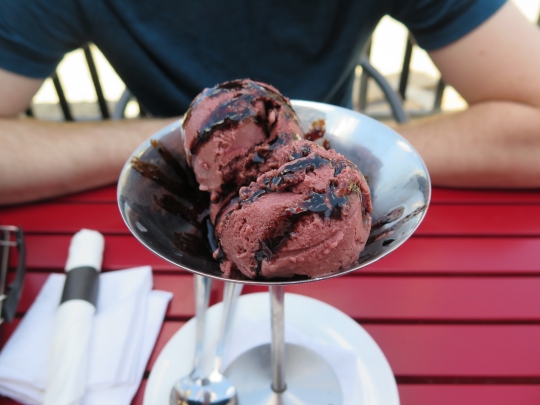 The denser, bread-like texture of the donut/bun held its shape well, but the sticky glaze meant a shower was necessary for everyone involved. Still, all the elements worked together so well and sharing one order (along with a side of this week’s horseradish slaw and a homemade raspberry balsamic ice cream for dessert) was perfect for two.

After we took some time to go home and nap, we made our way back out for dinner and stopped at Mill St. Brew Pub on 17th Ave. 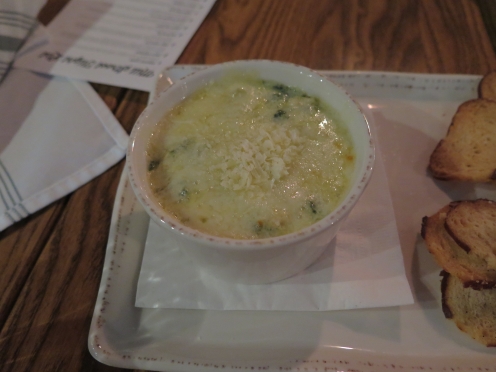 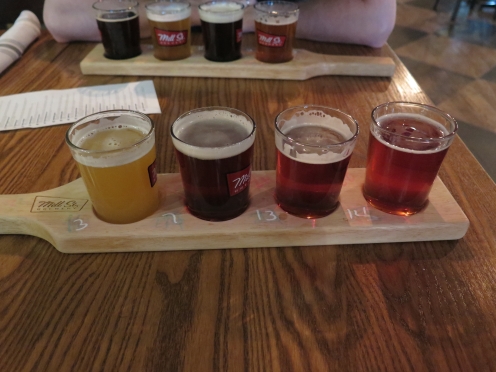 We were pleasantly surprised to learn about their very quiet and peaceful back patio (though we were quickly chased inside by a brief rain shower) and their menu was drool-worthy for sure! Being there for happy hour was good luck too as we were able to enjoy $6 flights of beer and a $4 order of shrimp dip and pretzel crostini along with our burger.

Mill St. was serving a house ground elk patty, wild boar bacon, Saskatoon berry and chili chutney, garlic aioli, Sylvan Star gouda and arugula. The elk was gamey, but tender and well-cooked. We didn’t detect any wild boar and considered afterwards that the unexpected pile of caramelized onions on the burger may have been used as a substitute for someone’s pork-free order, but I’m not one to send food back and it was very enjoyable! The Saskatoon chili chutney in particular made this burger stand out. The peppery, smoky and subtly fruity flavours in there were something else altogether. The bun was very nice and soft and the cheese was flavourful, but didn’t overpower the other elements in the dish. All in all this was a solid entry!

You’d think that two people who woke up the morning after eating two burger battle entries wouldn’t be interested in trying a third, but the beers we’d consumed the night before needed to be soaked up. We decided to try the Crunch Berg Supreme at Dairy Lane Cafe as this definitely seemed like something a little out of the ordinary and not to be missed!

The Crunch Berg Supreme is made from a Broek Acres ground pork chorizo patty, smoked mozzarella, cheddar cheese sauce, avocado, pico de gallo, pickled peppers, lettuce, refried beans, chipotle crema and enchilada sauce between two crispy tostadas and wrapped in a flour tortilla. The creamy avocado and crunchy tostadas made this a pleasure to bite into! This had all the smoke, salt, fat, freshness and zing that you would expect after hearing that grocery list of ingredients, but we were a little disappointed by the lack of flavour in the chorizo patty itself, especially knowing how flavourful their meals usually are – case in point, their Nashville fried chicken sandwich, which we also couldn’t resist today (with a side of house salad so we would still be able to walk away at the end of the meal).

Now that we’re lying on the couch trying not to vomit after a weekend full of decadent burgers, my verdict is in. Matt and I both agreed that if you are making room in your schedule, budget and belly capacity for only one of these three burgers this week, it should be the Canadian Sugar Rush from Naina’s. The elk burger and Crunch Berg Supreme were both delicious and worth trying, but there was something hauntingly good about that burger. The feeling of pure heaven while eating melted cheese and a glazed bun is something I won’t forget soon. If that pushes the envelope too much for your tastes, be sure to check out the rest of the YYC Burger Battle menu and remember to buy a burger to support Kids Up Front and Grow Calgary!