After a few days in Dubrovnik and some excellent road trips through and around Bosnia and Herzegovina, we made it to Split. I was particularly excited for Split because the old city is built into the site of the ancient Diocletian’s Palace, a UNESCO World Heritage Site. It’s a cool place to see with ancient limestone walls layered with buildings that were “new” by Diocletian’s standards, though still hundreds and hundreds of years old.

After a few hours of touring around, it was frustrating (to nerdy me) to learn that the answer to a lot of questions about different parts of the palace were simply “that answer is lost to history”. Obviously I had to eat a LOT to get over my sadness about the lost antiquities and historical record, so prepare yourselves.

After we checked into our adorable apartment, we hadn’t wandered two blocks before we stumbled upon Fabrique. Finding an actual quiet patio (at least until they turned into a night club later in the evening) was a thrill in and of itself in this very touristy area. 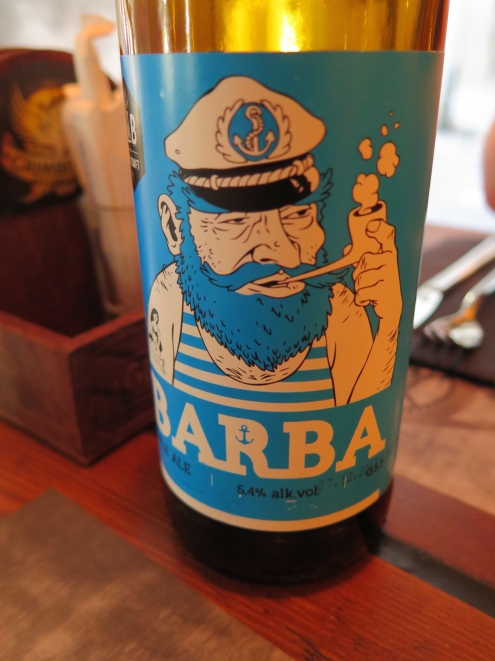 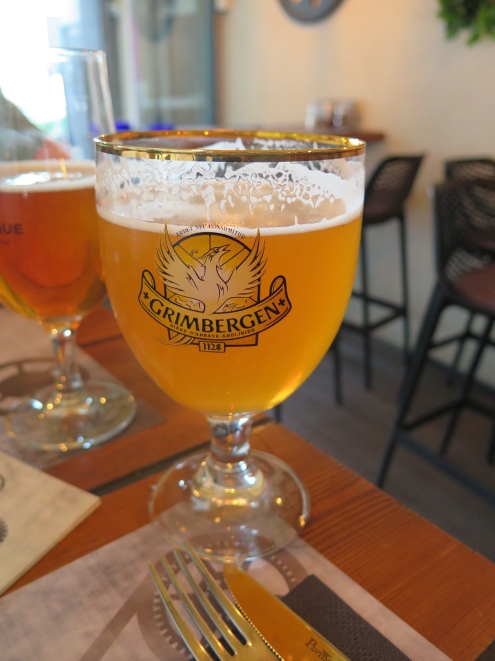 Their drink menu was loaded with European beers I’d never heard of. Matt had already sampled a few of them on a big Eurotrip a few years back with his friends, so luckily he was able to stand in as my beer sommelier for the evening! My favourite was the Grimbergen Blonde – I loved the hint of clove and it was so refreshing. Matt really liked the LAB Barba Pale Ale, an American-style pale ale brewed right in Split!

We had some tasty snacks and sides here, but one of the highlights was my “fried chicken” burger – a juicy boneless thigh coated in corn flakes with a creamy aioli and fresh veggies.

Matt’s favourite was his baked truffle gnocchi, which made us both want to curl up and die under the table because the cream sauce was so rich. I’d had big plans for exploring the dessert menu until I took one bite of this dish and realized that was never going to happen.

Breakfast the next morning was whatever we fancied as there were lots of walk-up bakery windows, snack carts and other vendors ready to fill us up with pastry and Italian ice cream.

There were a few bakery chains we saw around Croatia that all had a similar concept – a long, glass counter stuffed with sweet and savoury treats and a serious coffee counter. We made a quick stop so I could try a burek, a filled phyllo pastry. A common format for these is to make a long cylinder of phyllo pastry stuffed with either a sweet or savoury filling, then coil it into a tight disk. Burek vary a lot from country to country, but some version can be found throughout the Balkan region. The one I ordered that morning was filled with spinach and a tangy, salty cheese. Delicious, creamy filling with extremely crispy bites of phyllo went down well with a cappuccino and the only downside was the huge amount of grease that soaked through the bottom of the paper bag.

We also shared an order of fritules, which are small, sweet doughnuts drizzled with whatever your heart desires! We ordered ours with melted milk chocolate and I think the picture speaks for itself. These were crispy on the outside, chewy on the inside and a perfect canvas for the chocolate. What better way to start the day than with fried batter?

After breakfast we went straight to the Green Market, where you can pick up fresh flowers, snacks or a small souvenir. We may have purchased a Croatian limestone mortar and pestle, which Matt then had to carry all morning – sorry, dear! The food side of the market was buzzing with vendors selling hunks of local cheese, loaves of bread the size of a car steering wheel and fresh-sliced prosciutto to tourists and locals alike. Walking around the market was a lovely way to spend the morning. 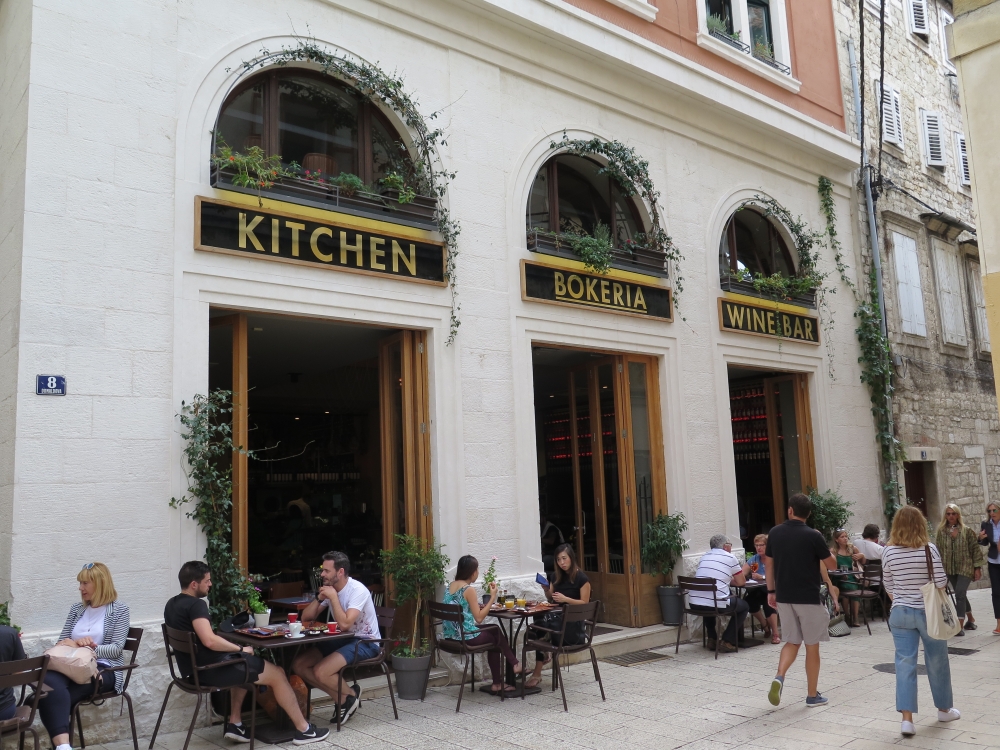 The number one place I had to try in Split was Bokeria, a super trendy restaurant that has been topping all sorts of lists. Open for breakfast, lunch and dinner – like so many Croatian restaurants – it’s still very hard to get a table for peak times. We called ahead and the only time they could squeeze us in that weekend was for lunch, which we were happy to take! Inspired by la Boqueria market in Barcelona, it’s a huge, modern space serving Mediterranean dishes and featuring local Croatian ingredients.

It was tough to work through the amazing menu, but we eventually got started with pear, gorgonzola and walnut brioche toast served on a decorative tile – hipsters are running restaurants all over the world, you guys. Matt anticipated at this point that we were about to be overfed, but I wasn’t afraid!

Matt’s main was the beef burger on a homemade bun. He couldn’t resist after hearing it came out with black truffle mayo, prosciutto, smoked cheese, mixed greens and house made pickles. It was, in his words, one of the best burgers he’s had in his life. The meat was juicy, the truffle mayo was intoxicating and the smoky cheese and prosciutto balanced perfectly against the fresh greens and lightly brined cucumber pickles. I can’t say we finished eating this, but it wasn’t for a lack of trying.

We also ordered the oxtail and chateaubriand risotto, which had a rich, beef-and-tomato base and a creaminess from the cheese and sour cream that made this almost overwhelming to eat. The risotto itself was ever so slightly underdone, but I didn’t mind and scooped as much of this as I could into my face until my body started to actually hurt.

After napping off some of the excess treats (or just the right amount, if you ask me) and spending an afternoon exploring the more ancient parts of the city, we went out for an early dinner at Oyster & Sushi Bar Bota, which has a few locations in some of Croatia’s larger cities. It was definitely not what we’re used to getting in Canada and I would be surprised if an actual Japanese person had been involved in any way with creating the menu or preparing this food, so we decided to order lightly and see how it went.

The deep-fried slabs on the right of the platter were the “spring rolls”, which ended up being more of a breaded crust containing a creamy, spicy chicken mixture. As a 7/11 taquito lover I didn’t hate this, but it felt a little out of place. The rest of the maki and sushi were pretty bland and served with a sweet chili sauce rather than wasabi paste or soy. We tried this restaurant hoping it would highlight some of the very fresh seafood that would surely be available in a literal sea port, but nothing really stood out. 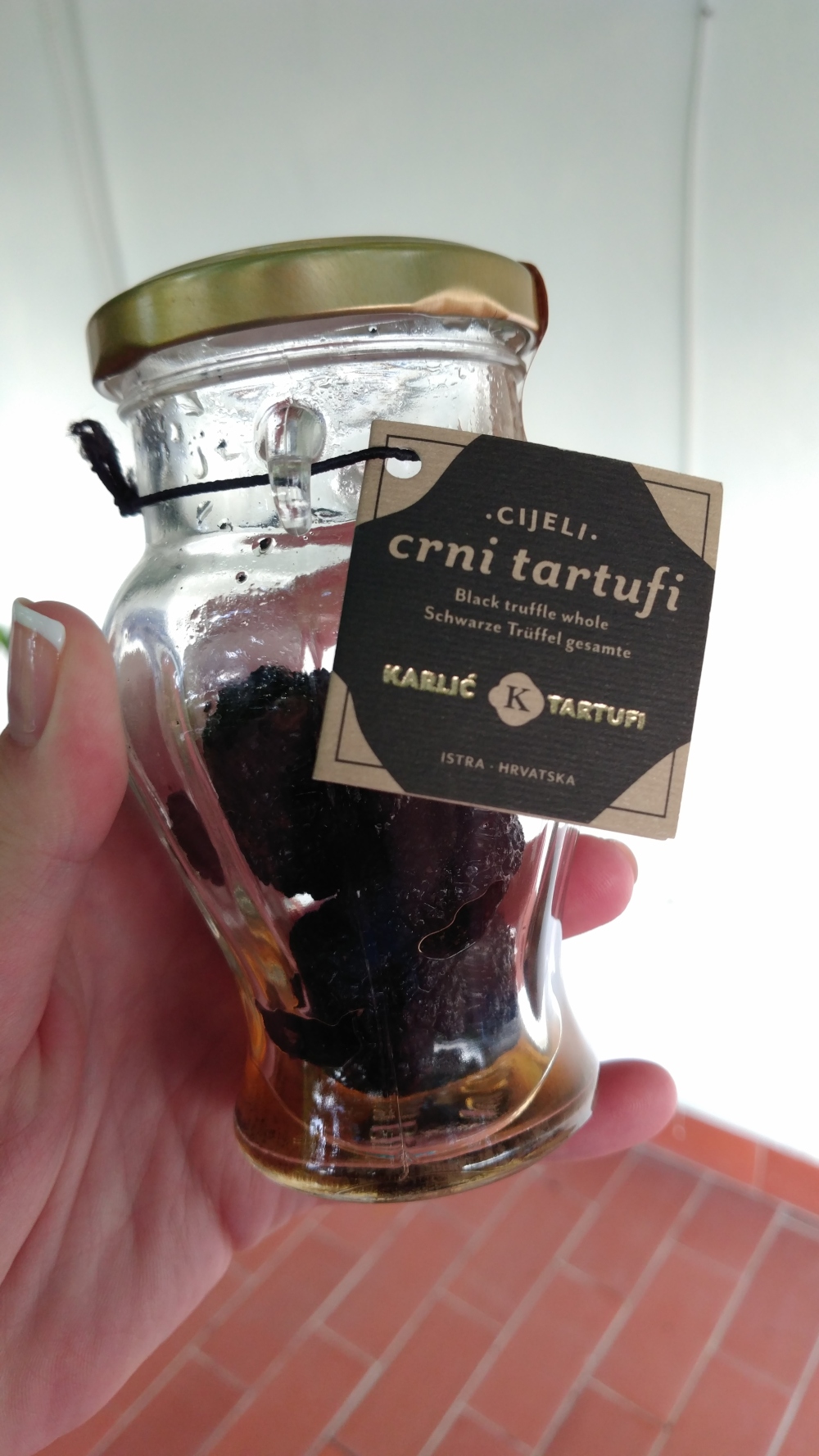 After dinner, Matt indulged my slightly stressful quest for some kind of local truffles, which I’d heard you could find relatively cheaply in Split. (Shout out to dear, sweet Alyssa of Alyssa Cooks Catering for talking me through the different options from afar.) We had seen them here and there all day, then when it came time to find those same shops we were completely disoriented navigating the twisting side streets and alleyways. Matt persisted until we found our prize, which I can’t wait to use in pasta and homemade truffle butter!

After that, we had an Aperol spritz and a beer at one of the many covered patios and regrouped. Matt needed me focused and ready for what he considered the main event of the day – dessert at Luka Ice Cream and Cakes. We skipped the indoor seating and headed straight for the walk-up counter outside. An older woman running the fryer suggested a waffle cone filled with fritules (remember those sweet donuts we’d already had that same morning?) and house made ice cream. We watched, awestruck, as she fried the fritules right in front of us and alternated them with scoops of sweet plum ice cream in a giant cone, then smothered the whole thing in melted milk chocolate. The plum ice cream had a smokiness to it that played well with the chocolate and fritules, and the whole thing was a delicious mess to eat on our walk home.

The indigestion nightmares from our indulgent day of eating made for a terrible night’s sleep, which was not ideal before our early morning ferry to the island of Hvar the next day. You can read all about the next leg of our trip here!