So to remind you, Matt and I had so far spent our honeymoon touring Dubrovnik with a few short stops in Bosnia & Herzegovina before heading to Split. From Split, we took a ferry to the small Croatian island of Hvar. After the culture, architecture and city life we’d seen for the first week of our trip, we were looking forward to a few days of beach exploration and gelato stand hunting followed by quiet evenings overlooking the sparkling Adriatic Sea. 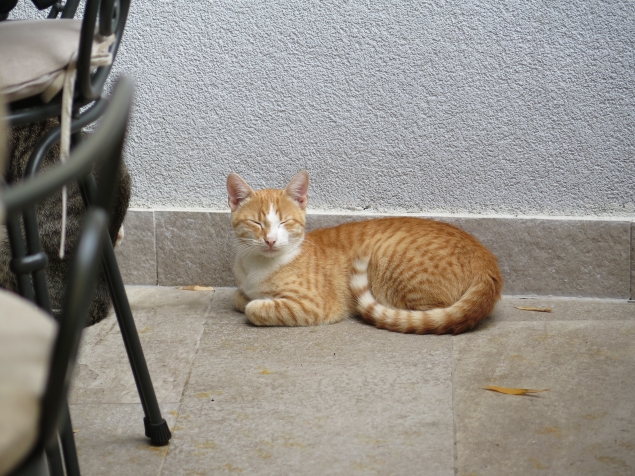 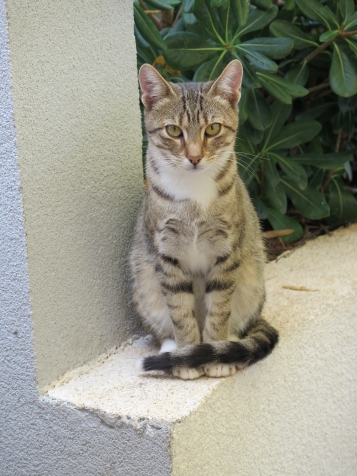 Our first order of business was finding a late lunch, so we quickly settled on Pizzeria Mizarola online and spent more than a few tense minutes trying to hunt it down while our hangry attitudes closed in on us. When we arrived, we were greeted by a shaded second-storey patio surrounded by tile rooftops and trees covered in ripening pomegranates. The best part though – we were charmed (Matt might say “accosted”) by a litter of juvenile cats lazing around the restaurant, begging unsuccessfully for Italian food. Heaven!

The food itself was well worth the half hour we spent climbing up and down stone steps to find it. We always share everything we order on vacation, but Matt’s request was the ricotta-filled dumplings in a sage and brown butter sauce with crispy prosciutto, of course – a staple throughout the region! These dumplings were unlike anything else we’d had before – discs of pasta stuffed to the gills with creamy ricotta. The rich sauce and filling made it such a velvety, addictive dish. Needless to say, we were both stuffed as full as those dumplings by the end of the meal!

After an afternoon of exploring the square (and seeing our first praying mantis in the wild – so cool!!) we went to Fig Cafe, an extremely popular choice for travellers in the area. Their team has a lot of foreign experience between them, so they bring a pretty trendy vibe to the quiet town with their vegetarian options, international flavours and fun atmosphere thanks to the pumping music and ebullient waitstaff.

Our sommelier at Restaurant 360 in Dubrovnik had given us a heads up about Hvar as a wine-growing region, so we knew we were in good hands when the staff at Fig Cafe comped us glasses of local wine to apologize for the wait. (Um, no apologies necessary, but thanks for the drink!)

For dinner, we shared (read: instantly devoured) a grilled peach and sweet potato salad covered in a pile of fresh white cheese (chèvre or similar) and drizzled in a tangy, sweet balsamic reduction. The soft textures of the cheese, sweet potatoes and peaches along with the crisp greens made this so refreshing to eat, especially since we’d been chowing down on much heavier fare for most of our trip. After splitting this salad and a spicy chicken burrito, we stopped at one of the town’s many gelato stands, then headed back up the many sets of stairs to our apartment.

Next came beach day! We had to pick our way down a steep cliff (Matt would call it a “slope”) in our swim shoes. It ended up being worth the climb, because just as I started whining, we came across a beautiful old inn right on the water. We followed the property’s stone wall and more gradual slope down to a quiet pebble bay called Dubovica Beach.

Full credit to Matt for doing the research to find this gem. There was an outdoor bar and a little restaurant, both of which appeared to double as the proprietors’ homes. The restaurant’s simple menu was primarily made up of cheese, bread, prosciutto and whatever fresh seafood the owner had on the grill. We ordered a plate of local cheese with olives and a platter of salty fried fish. The fish were very bony, but satisfying after some time in the sun. It all went down well with a sweet Croatian dessert wine called prošek (over ice to beat the heat!)

After many applications of SPF and a whiny walk back up the cliff, we majorly lucked out with dinner that night. We waddled our freshly showered and lightly sunburnt beach bods into Dalmatino, (one of the best-reviewed restaurants on the island) without a reservation and they were able to squeeze us in before the rest of their dinner guests arrived Let’s all give thanks and praise to Europeans for eating so late in the evening and leaving the early bird specials for nerds like us!

Our waiter brought us out little slices of carob pod to start the meal – this was my first time trying it and I was really into the earthy, semi-sweet flavour. It wasn’t something I could eat by the handful, but I see why it’s used by some as a healthier substitute for chocolate. 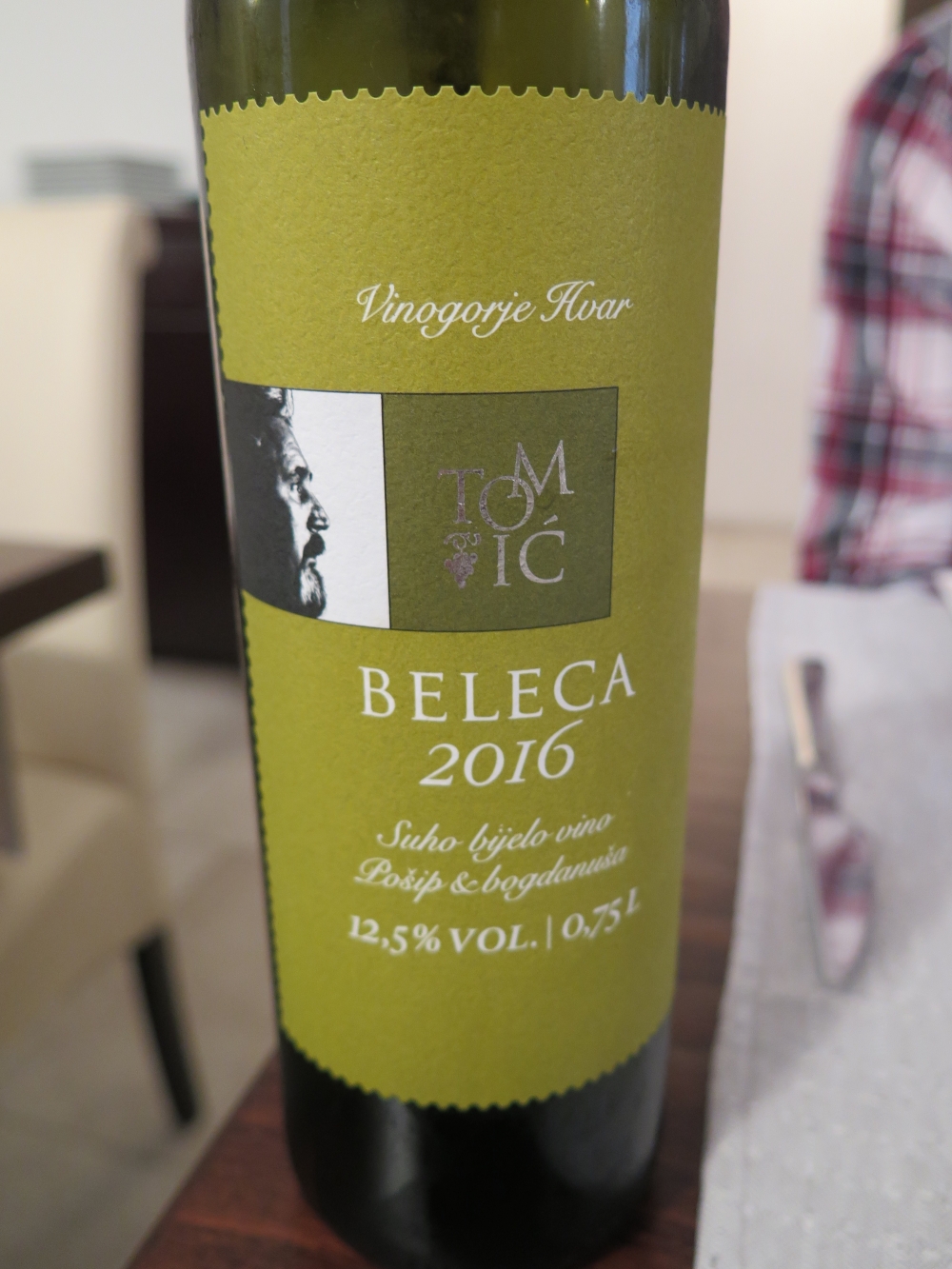 Matt and I don’t usually go wild for white wine, but because of the seafood and cream-based sauces we were exploring that night we went with a bottle of Beleca, a new bottle introduced last year by Tomić, one of the famous wineries on the island. It’s made with a combination of two Dalmation white wine grapes – Pošip and Bogdanuša. Fresh, dry and absolutely delightful! By the end of the trip we were googling places to buy Croatian wine in Calgary and not coming up with a lot of results, so if any of you have a hot tip for us, please let me know!

We were given complimentary liqueurs and bread along with our tasty seafood and dessert, but the star of the show and easily the most memorable dish on Hvar was the fittingly named gnocchi “Istria” made with black truffle and shrimp, both of which can be found abundantly on the Istrian peninsula. Our server sighed with envy when he put this plate down in front of Matt. It was simple, yet dramatic, with visible pieces of shaved truffle over top of alternating black and white pillowy gnocchi in a rich cream. Usually when I order a shrimp dish I expect to savour those sweet morsels the most, but they didn’t stand a chance against those savoury, tender mouthfuls of gnocchi and the powerful, truffly sauce. This was heavenly. 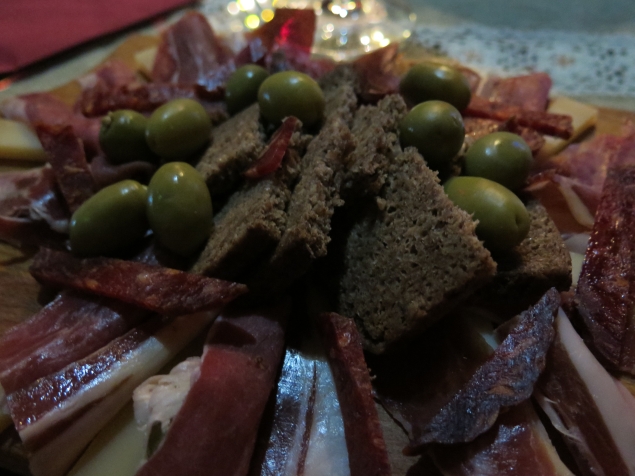 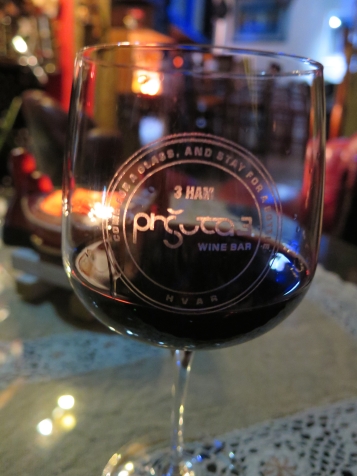 After dinner we wandered and found a little wine bar called Prsuta 3 to try yet more local wines along with a plate of freshly sliced local charcuterie. The place was small, cluttered and eclectic, but the wine collection was superb. Highly recommend this spot for a drink if you’re into dark corner tables and quirky decor!

Our last day on Hvar was a lazy one. Like so many coastal European towns, getting something to eat meant taking tons of steps down to the pier, then back up again to the apartment in the steamy September heat. We wanted a day to relax, so we started with a leisurely brunch at Fig Cafe (yes, the place with that fabulous grilled peach salad!)

The vegetarian breakfast burrito came highly recommended by other travellers who’d reviewed Fig Cafe online. Eggs, peppers, onions, potatoes and fresh salsa were all rolled into a large tortilla and smothered in a fresh, spicy and mouth-wateringly good sauce. I may have used a finger to take a few swipes of the remaining sauce when the meal was over. This was the kind of distressing dish where you’re highly aware that each bite means the meal is drawing closer to an end. Very highly recommend this if you can handle that kind of torture.

After a busy few days visiting this beautiful island, we enjoyed our last afternoon on Hvar slowly chasing sunbeams across our patio and reading our books, all to mentally prepare for navigating another confusing ferry terminal the next morning. Hvala, Hvar! All the memorable meals, late night ice cream, sun, water, and naps were very helpful for the long ferry ride and drive that awaited us before the next leg of our trip. Stay tuned to hear all about our time in Plitvice National Park!