We had such a lovely time hosting Matt’s family over the holidays and I wanted to tell you all about the meal we had to kick it off at One18 Empire. It was our first time there and we were very hungry, so prepare for some photos! 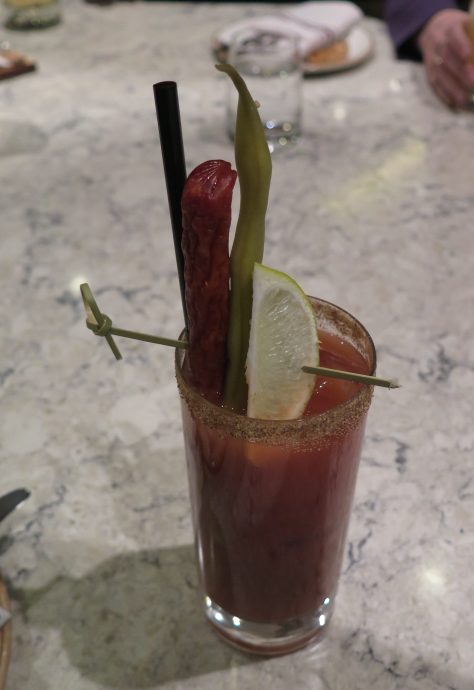 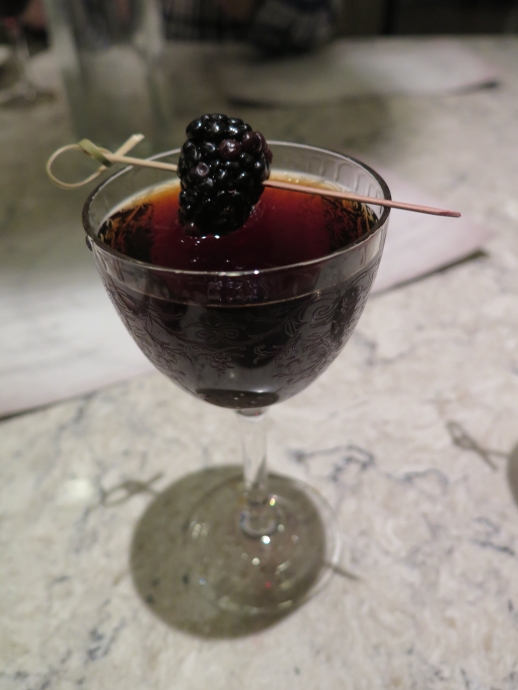 The drinks menu was our first priority – they are a self-proclaimed whiskey bar, after all! Their custom old fashioned cocktail option was particularly intriguing and luckily for us, Spencer ordered one right away so we could see what all the fuss was about.

Servers bring a mobile old fashioned station right to your table where they smoke your glass with the wood of your choice, then add a sweetener and bitters to your selected bourbon ($15 house, $22 premium). The ice ball was a big hit as well and sparked a lengthy conversation about cocktail technology – you might say it was an ice breaker! … Needless to say, a few others joined in on the old fashioned train for a second drink later and no one seemed disappointed with this choice!

Diane asked for a recommendation for a slightly sweeter drink, so she was advised to try the Doc George, which was a smoky, whiskey-based drink spiked with three different syrups! Not bad!

The Stokes Shrub caught my eye because frankly I couldn’t resist the idea of rhubarb. The drink was sweet, acidic and refreshing with a pleasantly bitter after taste. (Rhubarb lovers know what I’m talking about!) The $15 price tag was the only thing stopping me from having a second… and a third.

Now to the more important bit – the food! Like so many of the best places in Calgary, the menu here was quite focused on sharing. Shareables were smaller plates while the Signatures could work for either a single entrée or a larger shared dish as well.

Diane ordered the chicken supreme from the signature menu. The chicken was moist and the stuffing and vegetables were delicious. This was a big hit with Diane, though we were all joking about what made it so supreme and I later learned that a supreme of chicken is basically a quarter chicken with the wing and usually breast, also called the cotelette or filet. Fun fact, it’s also called the “airline” cut as it used to be a popular protein choice for in-flight meals, presumably before the dawn of super economy class. Much more appealing than the mushy pasta I received on my last transatlantic flight!

Marlene and Brian each ordered the One18 burger on a house pretzel bun with pickled mustard, applewood smoked cheddar and bacon. The whole grain mustard made a bit of a mess, but the patties were moist and tender (though a bit too salty for Marlene’s taste). I was also asked specifically to point out that the fries were cooked to a very consistent finish. Brian is a food wholesaler who takes his products seriously and he was pleased to report that none of the morsels were over or underdone – a big compliment from this french fry aficionado!

Spencer and Santana’s One18 Caesar Salad was a different take, for sure. It came out with a lot of arugula, which felt like a bold choice for the greens. Rather than bacon, this salad was crowned with fried crispy chicken skins, which were a little low on flavour based on the bites I stole. There were nice, big Grana Padano shavings over the whole thing and the egg appeared to be perfectly soft poached. I didn’t try the focaccia croutons, but Santana reported that they were bland and seemed to be unseasoned.

Santana and Spencer also split the signature Alberta pork rack. The pork itself was unfortunately slightly dry, but very flavourful and savoury. There were no toasted almonds as listed, but the carrots tasted fresh from the garden and the potatoes, while not chive-smashed as the menu had advised, ended up being a perfect pairing with the third dish they shared…

The three cheese dip, made with smoked mozzarella, provolone and jalapenos, came out with deep fried cheese curds and house potato chips, all of which were seasoned beautifully. Matt and I shared one of these as well (yes, the four of us should have planned better and just split one order) and it was all to die for. The whole dish was a salty, umami, crispy, creamy, glorious mess. My stomach just rumbled protectively while I wrote this up. She’s still mad at me about eating several cups of cheese in one sitting, but she’s already been told that I do what I like!

In a rare moment of marital harmony, Matt and I agreed that this shareable dish was our mutual favourite for the night. Three perfectly seared, sweet scallops were served over thin slices of tender pork belly on a bed of creamy, smooth polenta. Every bite was perfect. The only problem was that we should each have ordered one of our own.

Matt and I also ordered the Alberta AAA tenderloin (because why the heck not on this evening of decadence) and this is where things went a bit off the rails. We had asked for medium rare, then received medium well instead (and a bit dry as you can see), but it was a lovely cut of beef so we ate our way through. The starch was blue cornmeal, which wasn’t very flavourful, especially compared to the creamy polenta we were enjoying on the scallops plate right next to it. The brussel sprouts and lardons were addictive, but didn’t make up enough ground against the starch and beef. It also wasn’t very clear until we looked at the photos later, but the greasy fingerprints along the edges of the plate were a bit off-putting as well. I wouldn’t order such an expensive cut here again, but there were definitely some great ideas in this dish.

I really loved the stunning decor at One18 and the friendly, knowledgeable staff made it so easy to pick fun drinks. At our semi-private table we had a fantastic vantage point for peering out into the rest of the venue and it has such a great vibe. The great location on an intersection shared with charcut and the Calgary Tower really added to the feeling that it was a special night out. I’m not one to write off a great menu, killer service and a beautiful atmosphere because of a few mishaps over one meal (particularly when they weren’t given the opportunity to correct these issues), so I would certainly recommend One18 Empire (820 Centre Street SE) for a date night sometime soon – you’ve got to try those scallops!