As I mentioned in my post about New Year’s Eve, we were recently graced with a visit by four of our dear friends from Edmonton. This group in particular (which includes Leduc from Let’sEatYEG.com) loves trying new restaurants every time they’re in Calgary, so we were delighted to see Cleaver was open for brunch on a Monday for New Year’s Eve. 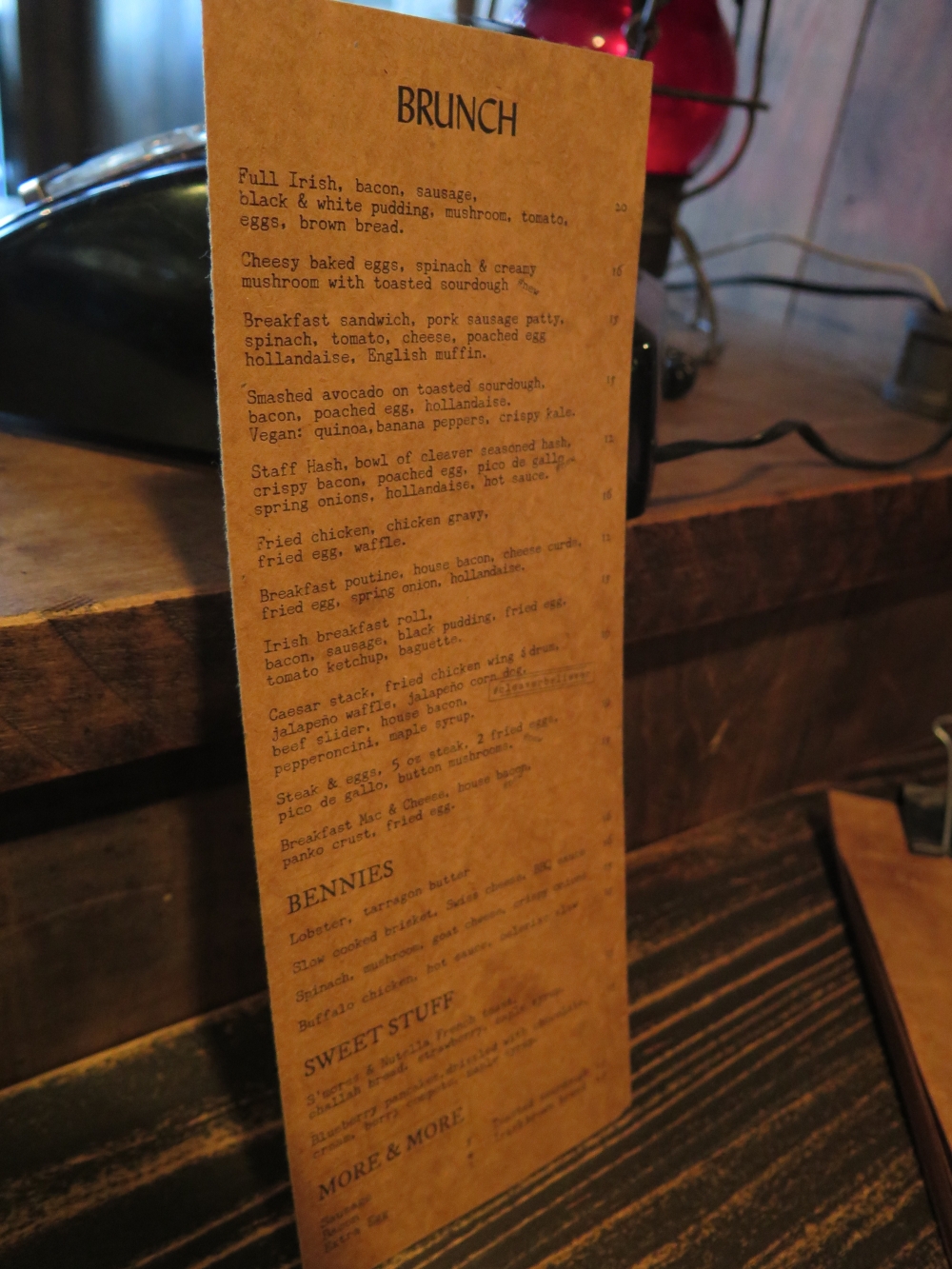 I’d been to Cleaver for dinner and drinks earlier this year and loved their over-the-top, flavourful menu. The brunch menu looked pretty decadent as well, so we all went in with empty stomachs and high expectations.

Our server was lovely, I should say right off the bat. Maybe we loved him because he called us all “dear” and “little guy” (sorry, Jamie!) with a charming accent, but more likely it was because we hadn’t even taken our coats off before he was telling us about the $5 Caesars and orange, grapefruit or pineapple mimosas on special. Jenn and I obviously opted for the pineapple mimosa! It was bright, tart and heavy on the wine – just the way I like it!

Jamie and Alyssa really liked their Caesars! Not pictured, but thoroughly enjoyed, was the salty hunk of thick cut bacon that came out a few minutes later, having been omitted as part of the garnish.

There was much fretting about what to order as the options were pretty dazzling. We ended up with multiple orders of the Staff Hash – it was our most anticipated item, for sure! It was a good value for $12, though we were surprised by the meagre portion of hollandaise and pico de gallo – this allowed the acidic, fiery hot sauce to dominate the plate. The bacon and egg helped to round things out, but we were definitely hoping for more of the other finishes. This was especially necessary as all the poached eggs on the table came out at medium doneness, so you didn’t get the benefit of saucing the dry potato base with a nice, runny yolk. None of us were asked how much we wanted our eggs cooked, but we also didn’t volunteer the information unprompted, so it didn’t bother me. Still, a tasty dish!

Jenn ordered the benny with spinach, mushroom, goat cheese and crispy onion ($15). This was a gorgeous dish – just look at that hollandaise and cheese! It was also a great portion for the price, though her side of bacon ($4) wasn’t as generous as she’d hoped. As major league brunchers, she and Leduc have analyzed a lot of bacon side orders and felt this serving would have been more competitive with a thicker cut or extra slice.

Leduc’s breakfast sandwich with pork sausage, spinach, tomato, cheese, poached egg and hollandaise ($15) looked pretty incredible! Leduc didn’t mind it, but said he’d be trying something else if he were to come back. This dish was the same price as Jenn’s two-benny plate and didn’t feel like it was as much food for the price. As you can see, it’s stacked so high that it wouldn’t be easy to eat once you add the other half of the English muffin. Definitely a fork and knife type of situation!

Poor Jamie. We all chirped him pretty badly when he declared he was getting the avocado toast before we even left the house. Alyssa also reminded him that he’d probably still be hungry and she wasn’t keen to share her meal because of his poor choices! He persisted and behold, the avocado sourdough toast with bacon, tomato, egg and hollandaise ($15) was a surprise winner of the morning! The bread was cut nice and thick, the avocado was crushed and seasoned, rather than puréed into baby food. Between the massive slab of toast and the side of hash browns, Jamie was (smugly) satisfied with his decision!

I don’t mean to brag, but I think my order was a real winner as well. My breakfast mac and cheese with house bacon, panko & fried egg ($15) was still bubbling when it was set down in front of me. The noodles were tender, the sauce was creamy, the cheese was molten, the yolk was runny, the bacon was thick and smoky… heaven in a skillet! The fresh spring onions added just the right zing and the whole salty mess was a glorious start to my day (though I will admit to feeling quite sluggish on the walk back to the car!)

Brunch at Cleaver (#102, 524 17 Ave SW) was so much fun, especially with a big group of pals willing to share sips and bites of their orders. There’s definitely some disparity in portion sizing with some items being more filling than others, but that’s all the more reason to share a few dishes with friends, the way Matt and I split the mac and cheese along with the hash. The service was friendly and the prices were reasonable with the most expensive item on the menu being the $20 full Irish breakfast. With a killer location on 17th Ave and great cocktails as well, this place is definitely worth a stop for a boozy brunch.